This is a campaign year. As a country, we are besieged by campaign activity as we move closer to electing a new president.

But, as Laurie reminded us last week during Bible Study, there is another campaign going on – one that never ends. The devil has put together a campaign against me — a well-planned, well-organized “operation” with the goal of detouring – no, ruining – my walk with the Lord.

I had never thought of the enemy planning against me in this way. It is disturbing to think that in the spiritual realm, there is a very real being that plots against me. Although the enemy is not omniscient, he knows my weaknesses and has a specific strategy to exploit them. He knows I try to rely on my own strength when I feel challenged. He knows I fall into a downward spiral of anxiety and depression when I feel overwhelmed or discouraged. He knows how I battle fear. He knows we are all still in this world, a broken, dark, and evil world, and that our flesh identifies with the world. He knows all of this, and he schemes against us all.

But God, being rich in mercy, because of the great love with which he loved us, even when we were dead in our trespasses, made us alive together with Christ—by grace you have been saved—and raised us up with him and seated us with him in the heavenly places in Christ Jesus, so that in the coming ages he might show the immeasurable riches of his grace in kindness toward us in Christ Jesus. For by grace you have been saved through faith. And this is not your own doing; it is the gift of God… (Eph. 2:4-8).

Praise God for His mercy and grace, for pursuing me, for redeeming me, for having a plan for my life!

So, how do we resist the lies of Satan’s campaign to detour us? I am praying for the boldness to launch a campaign myself – for the Lord. I read 1 Chronicles 16:8-24 in my homework for In the Garden this morning, and I was convicted by these verses:

Oh give thanks to the Lord; call upon his name; make known his deeds among the peoples! (1 Chron. 16:8)

Seek the Lord and his strength; seek his presence continually! (1 Chron. 16:11)

Tell of his salvation from day to day. Declare his glory among the nations, his marvelous works among all the peoples! (1 Chron. 16:23-24)

I was struck by all of these actions! May they comprise my campaign:

~ give thanks for my countless blessings

~ make known what the Lord has done for me

~ tell others about Jesus

~ seek God daily in His Word

It is indeed an important year for our country, and two very serious campaigns are underway for our votes. Let us remember there is another type of campaign that is being waged against us personally, where the stakes are eternal. Let us launch a counter-campaign, a campaign for eternity, where we declare the glory of God.

To be completely honest, this blog post is really hard to write, mainly because I feel that I keep saying the same things over and over again. I was about to write about how through the In the Garden study so far I have been so convicted about my love for this world, my love for the creation instead of the creator, but then I stopped and thought I may seem like a broken record.

Just the other day I was confessing to the Lord during my quiet time that I value my schedule and to-do list over Him, that I spend more time planning in my head how I’m going to get everything crossed off my list for the day than I think about His Word or how I can bring Him glory. What makes me sad as I write this is that I know I’ve confessed that same thing to the Lord before and I know I’ve even confessed it through this blog before. I really don’t want to be all talk and no action. I want to live what I say I believe.

Feeling like a broken record to the Lord is something that I battle a lot. I feel like I confess the same things over and over again, but true repentance doesn’t take place and then I get frustrated, and then (and I know you’ve heard this from me before) the focus is on me. I fear that the Lord just has to be getting annoyed with me and that was the same fear I was having about presenting yet another post about how the same sins keep appearing in my life.

As I sit here and write, I believe I see how I still question God’s love for me, or maybe just don’t completely understand how it’s possible. Do you ever question if God loves you?

Throughout this week of doing In the Garden there are certain parts of Scripture that the Lord keeps bringing to mind: “to live is Christ” (Phil. 1:21); “I have been crucified with Christ” (Gal. 2:20); “…count everything as loss because of the surpassing worth of knowing Christ” (Phil. 3:8). There’s a key theme in these snippets of Scripture—Christ. I wonder a lot why the Lord doesn’t just take all of our sinful actions away immediately when He opens our eyes and gives us faith. Why do we still have to deal with our flesh here on earth? Wouldn’t it make it easier to show people Jesus by being completely changed all at once? It’s because this life is not about me being perfect and overcoming all my sin—it’s about the fact that Christ has already overcome it! It’s not about me, it’s all about Jesus and His love for me that was perfectly shown on the cross.

So maybe I am a broken record. Maybe you feel like you are sometimes too. Maybe you question if God could still love you sometimes. I’m asking God for grace to stop looking at my sin and to start looking to my Savior, for help to cling to His cross, not just in my quiet time or when I’m writing blogs, but throughout my entire day—and not for my glory, but for His alone.

Let’s all ask for grace to say with Paul in Philippians 3:12-14, “Not that I have already obtained this or am already perfect, but I press on to make it my own, because Christ Jesus has made me his own. Brothers, I do not consider that I have made it my own. But one thing I do: forgetting what lies behind and straining forward to what lies ahead, I press on toward the goal for the prize of the upward call of God in Christ Jesus.”

Planted for His Glory 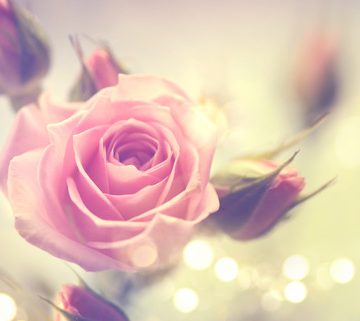 You know that saying that you want something “so bad you can taste it”? That’s me. I have this propensity to get so caught up in my hopes and dreams that this is all I can see, think about, or want. I often pushed aside my relationship with Christ. Whenever we would talk about laying our hopes and dreams at His feet in the lectures or in the study, I would always say, “Okay, Lord, take my dreams.” The next day I would wake up and act like I never said that. It was never an idea I would stick to or be intentional about. There was a time, in the not so distant past, when I would really up my communication with Him if I was praying for a job or crying out for provision to be made for me. I would tell myself, “You are going to do better today, you asked the Lord for something, and now you need to talk to Him more.”

For so long, I wanted to experience something other than opening myself up to Him and letting Him take up residence. For so long, my title mattered, what car I drove, what house I lived in. I wanted to taste the success and get praise from the world. I tried to have my feet set in two different places: (1) in the world and (2) walking with Christ. You can’t do both. You are tricking yourself if you believe you can walk in both. This was so me. And because I wasn’t finding exactly what I wanted in walking with Christ, like a child, I was constantly looking elsewhere. Oh! I struggle with this so badly. This can be set right next to anger as far as major weaknesses in my walk with Christ. I love what Laurie said in her lecture this past Tuesday: “Everything IN the world promises to fill the void.” You will always feel unsatisfied, you will always feel like you are “in search of something deeper.” I have experienced this.

But now I have come to a place where I surrender to Him. I don’t want to run anymore, I don’t want to chase after the world. I want to sit at his feet. I honestly just want to rest there. I can now truly say with Galatians 2:20, “I have been crucified with Christ; and it is no longer I who live, but Christ lives in me; and the life which I now live in the flesh I live by faith in the Son of God, who loved me and gave himself up for me.”

Realizing that His heart is tender towards me and patiently waiting for me, coupled with walking in faith to truly believe that, has been life altering these last couple of weeks. Exodus 34:6 describes God as, “The Lord, the Lord, a God merciful and gracious, slow to anger, and abounding in steadfast love and faithfulness…” These are the very attributes of God that have allowed me to have chance after chance to come to this point where I am right now. It was a paradigm shift in how I see Him. The fact that His grace is personally granted by Him to work on my behalf was a huge deal for me. In mercy He allowed me to struggle through this, to turn my back, and to question Him without giving up on me and without giving me the wrath I so deserved. This is unconditional, transcending, divine love that only God can give. So, I will in His strength patiently kneel in this throne room and offer up my sacrifice of thanksgiving and praise. In my flesh do I still have the urge to go in search of what I want? Yes. But this time my adoration, thanks, and love for my Father outweighs it all.

All for His Glory

Thank you for contacting Thistlebend.

How may we assist you?

We would like to serve you in any way we can. We will connect you with someone in our office who will be able to best help you with your question.